As part of the multi-cultural art program, fifth graders are learning about the artwork of the Aboriginal people of Australia. Until the 1970s, the people of each region only used the natural materials that were available to them. Even though many Aboriginal artists now have synthetic paints and manufactured paintbrushes, their artwork is still similar in style to the art that has been done on the continent for thousands and thousands of years.
In the far north, such in the area of Queensland, bark paintings were among the most as well as a type of cross-hatching known as "rarrk"; Some bark paintings also feature the use of dots of paint, but patterns of lines seemed to be most common in this style of artwork. Many bark paintings illustrate stories of the tribe or from the "dreaming"; More examples of this work can be seen in the current display in the front lobby at Washington Irving School. 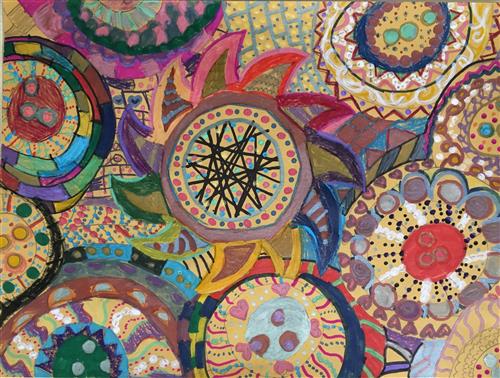